Workshop on Gender Mainstreaming in WATSAN sector held in Kathmandu 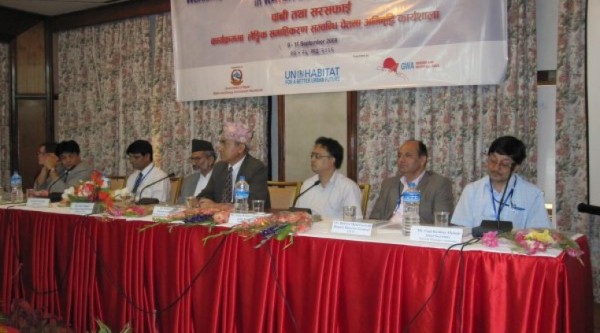 The government of Nepal in its National Water Plan-2005 has given special priority to the issue of gender mainstreaming to ensure equal participation and access to drinking Water and Sanitation (WATSAN), said State Minister for Energy, Chandra Singh Bhattarai. Minister Bhattarai said this while inaugurating a three-day workshop organized by Government of Nepal\ Water and Energy Commission Secretariat (GoN\ WECS) with support of UN HABITAT Water for Asian Cities (WAC) Programme Nepal and in cooperation of Gender Water Alliance (GWA) to enhance awareness on gender mainstreaming in WATSAN sector. According to him, the GoN has formulated short term, mid term and long term plans under the National Water Plan to extend drinking water facility throughout the country. Kishore Thapa, secretary at WECS told that the plans and policies should be prepared with an integrated approach to ensure equal participation of men and women in all sectors related to water resources including drinking water, hydropower, tourism, irrigation, industries, fish farming, transportation and others. Dr. Roshan Raj Shrestha, chief technical advisor of South Asia Region, UN HABITAT opined that gender mainstreaming is not being given much priority in practice though the issue of women participation is generally raised as a hot topic for discussion. He stressed on the need of formulating women inclusive action plans in WATSAN sector, and adoption of appropriate strategies for its effective implementation. At the workshop, representatives from more than 30 WATSAN organizations particularly from government agencies, municipalities and non-government organizations were oriented on gender related issues. The workshop also discussed on current situation of gender in WATSAN sector in Nepal. They were also helped to identify the gender related problems in WATSAN sector, and trained to draft the organizational action plans with reference to gender mainstreaming. At the end of the workshop, the participants made a common commitment to advocate ensuring gender integration at their respective organization, programme and intervention levels, . And each participants of the workshop also prepared action plans for their organizations. The lessons and experiences of the operational aspects of these prepared action plans will be reviewed in follow up workshops.  These lessons and experience of the participants will be the basis for the preparation of the “Resource Book for Gender Mainstreaming in WATSAN Sector in Asia”.