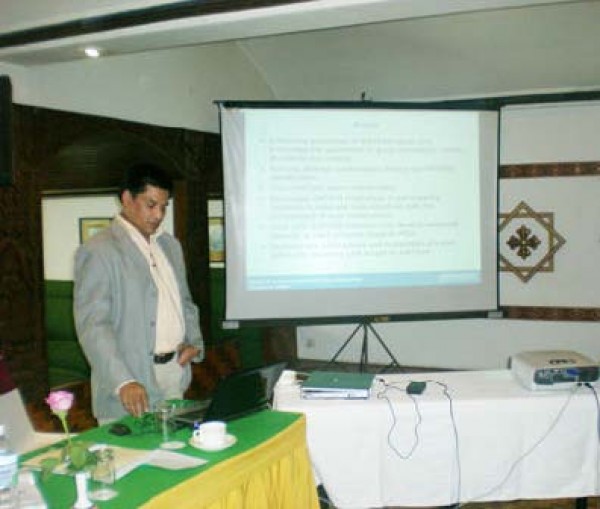 Kathmandu 13 March: UN-HABITAT Water for Asian Cities Programme (UN-HABITAT) and WaterAid in Nepal (WAN) organized a Dissemination Workshop on 13 March 2009 in Kathmandu to disseminate the best practices, success stories,challenges and lesson learnt of the Environmental Sanitation and Hygiene (WESH) Programme. As government agencies, UN Agency, International/Non-Government Organizations (I/NGOs) and community workedcordially while implementing WESH programme activities, the programme reveals a good example of cooperation among different stakeholders. Speaking at the programme, Joint Secretary at Ministry of Physical Planning and Works (MPPW) Suman Sharma opined that the Government agencies, I/NGOs and community must work together in order to extend safe drinking water and sanitation facilities. Coordinator of Health Sector Reform Unit at Ministry of Health (MoH) Baburam Marasini believed that WATSAN is not an issue of a single ministry as unsafe drinking water and poor sanitation directly influence the public health. Hence, there should be interministerial coordination to improve WATSAN sector – he said. Non-governmental organizations usually undertake projects on a pilot basis and they can not do it on mass scale although their works have proven to be innovative and cost effective. “Therefore, the government should take the initiative to replicate such projects on a mass scale to increase access to safe water and improve sanitation,” said Dr. Roshan Raj Shrestha, Chief Technical Advisor of UNHABITAT. Mr. Sanjaya Adhikary, Country Director , WaterAid Nepal Said “In order to achieve universal access, the water and sanitation sector,besides improving its activities, needs an increased budget of at least $23 million. At present however the sector is only able to utilize 67% of its allocated budget. It therefore needs an improvement in policy to be able to achieve better results. He announced that this year, for the first time, a separate sanitation budget has been allocated. Since majority of urban dwellers, especially urban poor are still distance away from safe drinking water and proper sanitation (WATSAN), UN-HABITAT and WAN jointly launched WESH Programme in 2007 in Nepal through local partner NGOs viz. LUMANTI and CIUD in close collaboration with local authorities and communities. The programme piloted various WATSAN activities in three diverse urban/ peri-urban locations of the country viz. Lubhoo in Lalitpur, Narayantole in Kathmandu and Bharatpur that improved the water, sanitation and hygiene situation of these communities. Some exemplary works has been done in these communities.As an example, in Bharatpur Municipality, the programme conceptualized and established a community level biogas system at Lankhu –a squatter community of 17 households. This biogas system not only takes care of the waste and wastewater of the community but also of the solid waste from the neighbouring community. It has improved neighborhood environment in Lankhu and contributed towards local livelihood opportunities. Likewise, a community owned and managed decentralized water supply system has also been established in Jakhadimai. Another example can be taken of the up-flow bio-filter piloted in Narayantole to treat the wastewater from about 20 households. A major milestone has been the establishment of a slaughter house at Hyumat of Kathmandu.