Kathmandu: The country continues to celebrate national water week every year to mark World Water Day on March 22, and the issue of water management should have steered a course but there is scant progress on this front. Experts attribute this to failure to prioritise four important areas: Developing awareness on freshwater, advocacy on water, investigation and study on water, and capacity building.

“There is the need for a consortium to advocate water issues and lobbying at the policy making level, which hasn’t happened till date,” said Adarsha Pokharel, vice chairman of the national water week organising committee. The theme of World Water Day this year—”Water for Cities”—highlights some of the main challenges of water management in urban areas, especially the increasingly difficult task in Kathmandu Valley where shortage of water is a perennial problem and the likelihood of the situation worsening in coming days is high.

Ravi Sharma Aryal, spokesman for the organising committee and Joint Secretary of Water and Energy Secretariat, said the government hasn’t prioritised the management of freshwater sources in the country. Among the various factors leading to water crisis in the Capital, rapid urbanisation and increase in population growth are the main causes, he said. Groundwater source that accounts for around 50 percent of total drinking water supply is being over extracted resulting in depletion of already diminishing water resources. More than 30 percent of the people in Kathmandu Valley depend on groundwater, according to a conservative estimate. It seems the days ahead will go from bad to worse.

Experts are warning that more than 80 percent of groundwater used for drinking purposes in Kathmandu contains high level of bacteria and other harmful microbes. The depletion of groundwater level is alarming. Earlier, digging down till 20 feet was enough to strike groundwater. Now, it is hard to strike water even at a depth of 40 feet, say experts. Kathmandu Upatyaka Khanepani Limited (KUKL), the sole utility responsible for the distribution of potable water in Kathmandu Valley, alone pumps out around 60 million litres of groundwater a day.

According to KUKL spokesperson Suresh Prasad Acharya, the water body every year digs four tube wells in different places in Kathmandu Valley. The daily water demand at present is 320 million litres but the supply is only around 130 million litres, he said. KUKL runs 70 tubewells, of which 60 are operating, while it is planning to construct 35 additional wells within four years. Ground Water Resource Management Board (GWMB) estimates groundwater extraction to be two million litres daily. At this rate, 23 million cubic litres of groundwater is pumped out in Kathmandu Valley annually, which is more than twice than the recharge.

If groundwater extraction continues at this rate a disaster of the worst kind is likely, said engineer Ishwor Raj Onta. “We are aware of the threat but cannot do anything without a policy in place. The haphazard pumping out of water should be checked on time.” He said the government needs to allocate space to dig ponds for recharging groundwater as fertile land is fast turning into a concrete jungle. 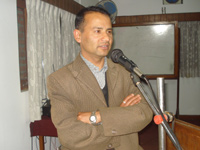 “Once the policy comes into effect, it will be the first of its kind to restrict extraction of groundwater in ‘danger zones’ without permission from the authority and help the government launch different water recharging programmes,” said KUKL Management Board Deputy Director Narayan Kumar BC. According to BC, tube wells constructed for domestic purpose must be registered with the board and license needs to be obtained to extract water for commercial purposes below and above 100 meters. “We will decide on granting permission to extract groundwater by studying particular areas,” said BC. “The policy especially focuses on making groundwater extraction balanced by identifying groundwater as an important source of water.” 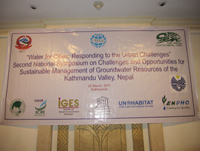 Kathmandu: World Water Day 2011 was observed in Nepal on Tuesday by organising various programmes with the theme—Water for Cities: Responding to the Urban Challenge. As part of the week-long programme to mark the day, a national symposium on “Challenges and Opportunities for Sustainable Management of Groundwater Resources of the Kathmandu Valley” was organised by Nepal National Water Week Organising Committee 2011. In the programme, water experts stressed on the need for a proper policy on urban water management as well as groundwater uses and its implementation. 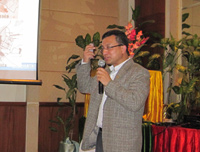 Padma Sundar Joshi of UN-HABITAT said due to acute water shortage in urban areas of the country, people are forced to dig deeper while making wells, exploiting the fossil water. Stressing that water for sanitation is a serious issue, he said, “There is urgent need for a national dialogue on urban water management.” According to Water and Energy Commission Secretariat (WECS), groundwater is the source of 50 percent of the drinking water in Kathmandu and increasing dependence on it is resulting in its depletion. Ravi Sharma Aryal, Joint Secretary at the Water and Energy Commission Secretariat, said the large-scale groundwater extraction for commercial purposes is mainly to blame. Aryal said the time has come to prepare a proper policy on groundwater uses, regulate its competitive extraction, deal with ownership issues, reduce overlapping authority, adopt a license system for commercial purposes and enact a special law. A census projection estimates the population of Kathmandu Valley in 2011 is 2.2 million and the number is likely to swell after the 2011 census. The urbanisation rate of Nepal is 6.44 percent, with Kathmandu Valley alone covering 31 percent of that chunk.