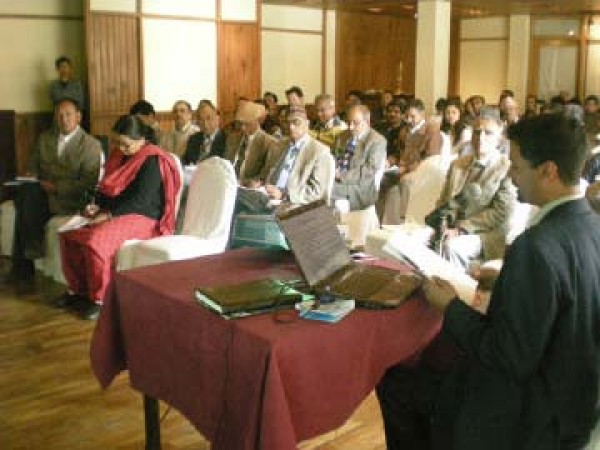 Kathmandu, 29 April: The global community as usual observed World Water Day (WWD) 2009 on 22 March focusing on “Transboundary Water: Sharing Water, Sharing Opportunities”. The day is being celebrated globally since 1992 to address the issues related with drinking water and its’ associated problems. In Nepal, a week-long “National Water Week 2009” was organized from 18 to 23 March to mark WWD 2009 in orderto aware and sensitize policy makers, development planners,bureaucrats, environmentalists, researchers, advocacy groups,students and the society as a whole on the water and climate issues, and illustrate the need and generate a thirst on proper management of water – the scarce resource. Over 50 organizations comprising government, non government, professional societies and youth clubs carried out different events concentrating on a common theme “Water, Climate and Our Life: Merging Interests, Creating Synergies.” Appreciating it, UN-HABITAT Water for Asian Cities Programme Nepal also expressed its solidarity in this intiativr The Water Parade organized at the beginning of Water Week brought more than 1000 participants from different fields and walks together to march for the improvement of water,sanitation and climate change issues in addition todisseminating the theme of water week celebration. During a week long celebration, Honorable Minister Ganesh Shah, Ministry of Environment, Science and Technology, Hon'ble Minister Bishnu Prasad Paudel, Ministry of Water Resources, Hon'ble Chairperson of Constitution Assembly (CA) Subash Nembang and many other CA members' participated in different events including inauguration of water week, water parade, conferences on world water day and world meteorological day. Their involvement at these events and the commitment they made during these events reflected the growing interest of the government and political leaders on water, sanitation and climate change issues, and ensured stakeholders and others to endorse these issues properly in new constitution of Nepal. The Water Week Organizing Committee, a committee formed to coordinate the Water Week 2009, organized a two-day “Water Exhibition” for mass sensitization on water related topics. Information dissemination during these events helped over 2000 people to increase their knowledge on water and climate related issues. Likewise, the presentations and documentary films further helped to disseminate information on subject matters. Information on water related issues were disseminated widely by performing street drama entitled “Water: Our Life” at three places of Kathmandu Valley. An Inter School Art Competition on “Importance of Water and its' Scarcity” had also been organized to sensitize students on water related issues and disseminate the information on water and climate change from educational institutions as well. At the closing of the Water Week, Kathmandu Water Declaration 2009 was released, which has been considered as the key achievement of the Water Week 2009. In the declaration, water is considered as the basic human needs and also has the ecological and economic value. In total, the National Water Week 2009 effectively created awareness to government and political leaders to make their commitment to address water and its related issues. It disseminated information on water and climate change at public level through various activities and assembled stakeholders to work for the improvement of water sector.