Health and Hygiene Improvement Programme in Bharatpur and Ratnanagar 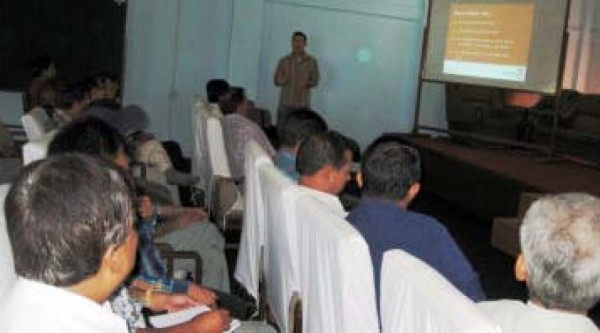 Kathmandu, 27 May: Practical Action Nepal (PAN), Environment and Public Health Organization (ENPHO) and Municipal Association of Nepal (MuAN) is going to initiate different water and sanitation related activities under "Strengthening Water, Sanitation and Hygiene Treasuring Health" programme in Bharatpur and Ratnanagar Municipality with support of UN HABITAT Water for Asian Cities Programme Nepal and European Union (EU) to improve water supply and sanitation situation in these areas. The same project will also implement its activities for four years in other five municipalities and three peri urban areas in addition to these two municipalities. An interaction programme was organized in Bharatpur to disseminate the information of various activities that will be implemented soon in these two towns. Speaking at the programme, Mr. Hom Nidhi Poudel of Social Welfare Branch, Bharatpur Municipality told that the project had been focused on various awareness raising activities to sensitize people resided in urban poor communities on water, sanitation and health related issues. According to him, the project has allocated 0.7 million euro for the project implementation. Mr. Binaya Shrestha of PAN believed that the project will get success to improve public behavior on health and hygiene. The country bears the loss of some 10 billion rupees every year in combating with water borne epidemics and its preventive measures. This project has been anticipated to minimize waterborne disease epidemics and these financial losses by 25 percent in project areas. The project has also targeted to minimize in-house air pollution by 50 percent. The project will promote environment friendly technologies in 16 communities, initiate School Led Total Sanitation (SLTS) approach in 35 schools; and train two hundred women social workers and leaders of 25 Women Groups on in-house air pollution and health related issues. It will also run a campaign in 35 schools, 16 communities and 20 health posts to increase public awareness. Six thousand, out of 130 thousand, populations in Bharatpur are under poverty line. These populations are still deprived from adequate water, health and hygiene services. Similarly, 23 percent of 44 thousand 714 people in Ratnanagar are extremely poor. The project has been expected to improve livelihood in these municipalities by accessing water supply and sanitation services remarkably by the end of this project. Mr. Binaya Shrestha of PAN, Mr. Rajendra Shrestha of ENPHO and Mr. Tika Ram Kandel had presented their papers on different aspects of the project at the programme. Political leaders including Mr. Khem Raj Poudel of Maoist Party; Mr. Bhakti Gautam of CPNUML and Mr. Hom Nath Sharma of Rastriya Janamorcha also shared their opinion at the programme