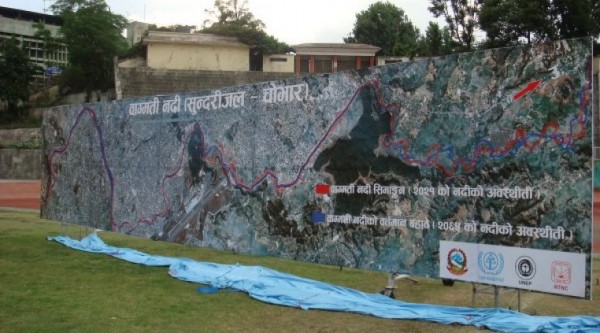 Rivers are easily available surface water sources, habitat for various aquatic flora and fauna, beauty and dignity of human settlements, and, in many cases, hold cultural values as many ritual activities are performed on riparian landscapes. However, rivers in the urban zones of developing countries are getting polluted rapidly in these days. The river pollution is also appearing as a critical problem in Kathmandu Valley. The chronically polluted Bagmati River and its tributaries have been causing environmental pollution and increasing threat on public health. Despite being major river system with aesthetic and high religious value, it has been turning into open sewage and disposal site of solid waste. Besides, sand extraction from the river and encroachment of river banks by squatters and others are degrading natural phenomena and narrowing the river system. However, a serious lack of planning, regulations, enforcement, and implementation of appropriate and effective programmes has been realized in this regard. The Ministerial Cabinet of Government of Nepal ratified Bagmati Actional Plan (BAP) on 11 August, 2009 and approved the five-year plan as the official framework document for the development of river system of Kathmandu Valley. The plan had been prepared by Bagmati Civilization Integrated Development Committee (BCIDC), National Trust for Nature Conservation (NTNC) with technical and financial support of UN HABITAT Water for Asian Cities Programme Nepal and United Nation Environment Programme (UNEP) to address the complicated issues of Bagmati conservation. The Bagmati Action Plan is a five year project that aims to clean the Bagmati river system and its tributaries. Based on the population density, the plan has classified the valley into five different zones- Natural Conservation Core Zone (the hills around the valley), Rural Zone (outermost area of the valley), Peri-urban Zone (area lying between rural and urban core area of the valley), Urban Zone (five municipalities of the valley) and Downstream Zone (from Sundarighat to Katuwal Daha), in order to address the issues of river pollution at micro level, and proposed different activities for different zones. It has recommended conventional waste water management system for urban core zone. Likewise, Decentralized Wastewater Treatment System (DWTS) has been explained as a new approach for rural and peri-urban zones. The rehabilitation of the existing wastewater treatment plants at different locations of the valley has also been included. In context of improving environmental sanitation and reducing river pollution at Natural Conservation Core Zone and Urban Zone, the plan has given top priority to onsite sanitation including technologies such as ECOSAN toilet. It has included the faecal sludge management with high priority in some areas as well. The Bagmati Action Plan has prioritized the promotion of rainwater harvesting, and rehabilitation of existing dug-wells and ponds to recharge ground water with rainwater. The land purchasing and building construction nearby river banks of Bagmati, Nakkhu and Manohara Rivers will be prohibited. According to the plan, the squatter settlement on river banks of peri-urban and urban zone will be relocated and resettled, and the river banks will be protected using bioengineering.