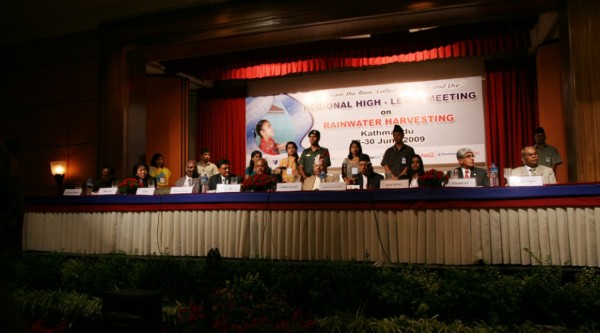 The Ministry of Physical Planning and Works of Nepal organized a Regional High-level Meeting on Rainwater Harvesting in association with UN-HABITAT, Helvetas, Rain Foundation/BSPN, Government of Finland, Plan Nepal, RWSSFDB, Water Aid, WHO, Coca Cola and other sector partners from 28-30 June 2009 in Kathmandu. This meeting has helped to support the initiatives taken in the fifteenth SAARC Summit held in Colombo in August 2008 where the summit declaration had re-emphasized the need to harness rainwater for development and sustainability and had urged countries to take appropriate action. The programme was inaugurated on 28 June 2009 by Honorable Prime Minister Mr. Madhav Kumar Nepal. Addressing the programme, he told that the utilization of rain water as a renewable source is very important in the context of growing requirements of Nepal. In his opinion, rain water can be a very feasible and convenient option for daily water use. He believed that rainwater can be a viable source of water supply in hills and urban areas to lessen the problem of water scarcity and added that there is an immense probability of collecting, preserving and using water from the rain in Nepal. He, then, informed that the Government of Nepal has been putting all possible efforts to meet the daunting task of providing access to safe water to all citizens by 2017. He requested the countries in the region to join hands in making concerted efforts to promote co-operation in tapping rainwater for mutual and multiple benefits. At the meeting, the secretaries, senior policy makers and officials of the participating SAARC countries shared their field experiences and research results on technical, social, ecological and economic aspects of RWH, and discussed to explore the potential of using rainwater for drinking, groundwater recharge and for other domestic applications. The current policies and guidelines adopted in the regional countries were also discussed upon. In addition, discussions were also held on very important aspects of RWH like the water quality, private sector participant among others. In addition to the discussions on different aspects of RWH, the participants also had the opportunity of observing some demonstrative activities on RWH in Kathmandu. Out of the seven sites selected for the field visit, five sites were established with support from UN-HABITAT. The participants were impressed with the initiatives of the local community and the enthusiasm shown by them in preserving their traditional water management systems where they are actively involved in capturing rainwater in augmenting the groundwater table. The meeting concluded on the third day with 9-point recommendation that has advised the regional countries to keep indigenous knowledge and skills in consideration while designing and constructing rainwater harvesting system. It has also suggested to form the South Asia Networking Center for regional cooperation for rainwater harvesting. The recommendation has also emphasized the Private Public Partnership (PPP) to explore cost-effective option of rainwater harvesting so as to enhance sustainability of water supply services in the region. The recommendation was handed over to Deputy Prime Minister and Minister for Physical Planning and Works Mr. Bijay Kumar Gachedar at the closing ceremony of the meeting. Addressing the function, he said that the rainwater could play an important role to enhance water security both in rural and urban areas. He said that the government would continue to work to provide safe water supply for all. An exhibition on RWH and other water related issues had also been organized during the same event. A photo exhibition reflecting different technologies of rainwater harvesting was also organized supported by UN-HABITAT and GUTHI. The best three photos selected through viewers votes were awarded by Mr. Gachedar at the closing function.