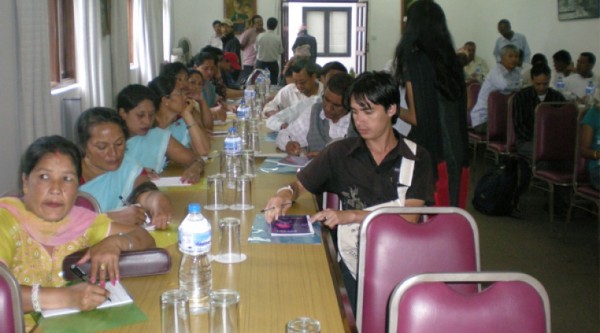 A sanitation improvement programme is being carried out in Nala, Kavre using the household centered environmental sanitation (HCES) planning approach for the first time in Nepal. The programme was launched officially by the Constitution Assembly member Krishna Prasad Sapkota on 7 September, 2009 in Dhulikhel. Addressing the launching programme, Sapkota said that the developmental activities should be planned and implemented properly for the sustainable development of Nala. He further added that the household centered environmental sanitation programme will be the foundation to the improvement of environmental sanitation in the village. Chief Technical Advisor of UN-Habitat, South Asia, Dr. Roshan Raj Shrestha advised the local residents of Nala to give top priority to the planning phase while preparing the sanitation plan. Further, he said that they should give up the tradition top down approach of planning and that the households and communities should be placed at the center of the planning, identification of technologies and during implementation. "Local people will be involved from planning to implementation phase of household centered environmental sanitation programme in Nala", said Padma Sundar Joshi, Executive Director of Center for Integrated Urban Development (CIUD). He told that most of programmes in Nepal fail to meet its objectives because the target groups are not given prime consideration at the time of planning. The household centered environmental sanitation plan will be conducted in ten steps in Nala, said Mingma Gyalzen Sherpa of EAWAG who is coordinating and providing technical support to the HCES programme. As part of the planning process, the programme will assess the baseline sanitation conditions, needs and priorities of individual households and community; identify appropriate sanitation options, and finally draft the environmental sanitation plan. All these steps involve users’ participation from the very beginning. The programme initiated in Nala is currently in its fifth stage, said Mingma Sherpa. The HCES approach is being implemented with technical and financial support of UN HABITAT and the Swiss Federal Institute of Aquatic Science and Technology (EAWAG) in partnership with CIUD and the Nala Integrated Development Committee at the local level. Similar HCES programmes are being implemented in other locations around the world, one in Costa Rica , Central America, one in Burkinas Faso, West Africa, two in East Africa and two in Asia by EAWAG. The HCES approach places households, communities and neighborhood at the centre of the planning process, adopting participatory processes from planning until the implementation stage and in the sustainable operation and management of the infrastructures established. It encompasses an integrated approach where safe water supply, sanitation and hygiene are addressed simultaneously.