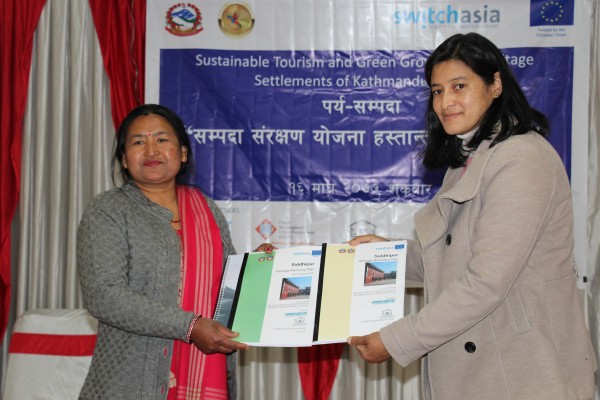 Parya Sampada Project completes the Heritage Recovery Plans of Siddhipur and Lubhu. In the formal program organized by Lumanti, one of the implementing partners of the project, the detailed reports are handed over to Mayor Rameshwor Shrestha.

Addressing the mass, Mayor Shrestha stated that the municipal board has emphasized in preserving the cultural monuments and sites of Lubhu and Siddhipur. He thanked Lumanti for carrying out the detailed study and design of cultural heritages and committed to endorse those plans through annual programs and allocation of budget.

"The local must feel the essence of cultural heritage, initiate the social marketing and promotion aiming to contribute to the circular economy and tourism." he added.

Nirmala Thapa, Deputy Mayor of Mahalaxmi Municipality stated that though they have knowledge and understanding in preserving the cultural heritages, the municipality lacks a clear plan and proper cost estimate. She thanked Lumanti for providing the crystal clear plan in preserving the heritage and assure that her entire team will focus to step ahead.

Local government and respective ward offices feel the essence of cultural heritage where concrete planning and its execution is the most. Sharing his views in the program the Surendra Amatya Chairperson of Ward 6 focused that the project like Parya Sampada and team like Lumanti must provide technical information and continuous support for proper execution of the Heritage Recovery Plan. He said that the technical team should bridge line existing guidelines, public sentiment, and essence of cultural sites.

Speaking over the program Arun Rai from UN-Habitat stated that the Parya Sampada project is prioritizing, revitalization and reconstruction of the cultural sites in Kathmandu Valley. The recently submitted report from Lumanti is a skeleton or blueprint for renovating and promoting the cultural heritages of Mahalaxmi. He requested Mahalaxmi Municipality for the timely execution of the plan and made assurance that Parya Sampada is always there for technical back up in future.

Lumanti Joshi from Lumanti shared that these Heritage Recovery Plans are communal assets and effort of the project and local government targeting to preserve heritages.

The funding partner European Union and Switch Asia are contributing in promotion of tourism through cultural heritages.