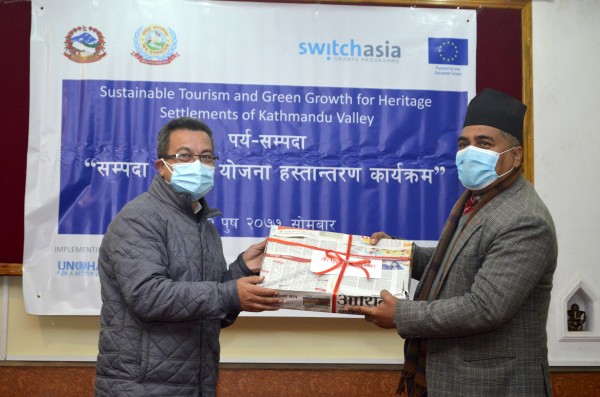 The heritage recovery plan incorporates the information with respect to the revitalization, re-construction, and preservation of tangible and intangible cultural heritage of Kirtipur. The core technical team from Lumanti carried out the research in consultation with all stakeholders including municipality officials, local people (child, youth, women, elderly citizens). The plan incorporates the detailed study of Panga, Kirtipur and Cho: Baha respectively.

Padma Sundar Joshi from UN-Habitat said that the municipality board including concerned authorities and specialists ought to minutely examine the heritage plan and speed up the execution at the earliest. The completely clear plan with the information of safeguarding the significant heritage destinations particularly from Kirtipur Municipality Ward No 1, 2, 3 and 10 need to execute action as per plan. Mr. Joshi has committed that Parya Sampada Project, UN-Habitat is always keen to support the local government.

Ramesh Maharjan valued the incredible effort of Parya Sampada including the whole group of Lumanti and UN-Habitat for building up the roadmap for safeguarding the cultural heritage. He said that the municipality is equally concerned on conserving the aesthetic value and promoting the cultural tourism. "Our board has set up the allocated budget for promoting the intangible heritages of Bungamati." he added.

Saraswati Khadka, Deputy Mayor of Kirtipur esteemed the hard work of the technical team. Despite the COVID-19 pandemic, the team had used the participatory methodologies both the physical and virtual medium for identifying the priority need of Municipality.

"In spite of enthusiasm for changes in terms of conserving tangible heritages, the municipality is confronted with insufficient budget and different opinions from local" she added.

The ward chairpersons from Kirtipur municipality highlighted that this holistic plan include the information pertaining to public spaces, traffic the board, public latrines, green zone, and development of Phalcha and safeguarding the tangible & intangible heritages. They have committed to make the essential action within the available budget and time frame.

Lumanti Joshi from Lumanti expressed her gratitude towards all supportive hands and constructive minds from different stakeholders. She guaranteed that her association and group is consistently there to aid the municipality during its execution in future.

The Parya Sampada project in support of the European Union and Switch Asia is working on preserving cultural heritages of Kathmandu and Lalitpur.