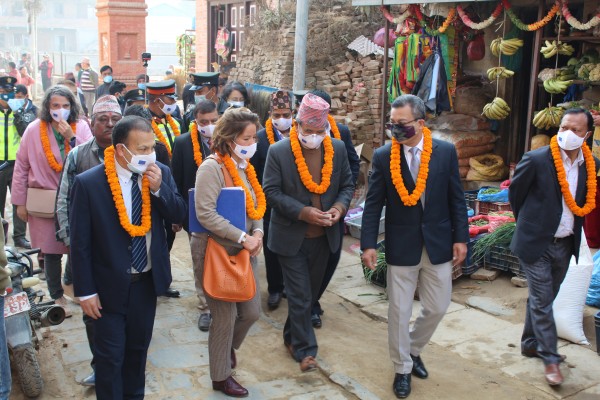 February 24, 2021: Her Excellency Nona Deprez, EU Ambassador to Nepal   focus on promotion of culture, tourism and governance. Addressing the mass at Bungamati, after the site visit, she admires the deeds of Parya Sampada project in preservation and promotion of tangible and intangible heritages.

She recalled the major intervention of the project in reconstruction, promoting Newar culture, cuisine, and attire enriching the social norms and values.

Having the welcome drinks at De pukhu with Mayor Chiri Babu Maharjan and other dignitaries, she admires the peculiar nature of welcoming guests in Newar culture. Local newar cuisines were showcased at De pukhu.

During this heritage walk, guests were presented with newari bhajan at different alleys of Bungamati. At Jawalakhel buspark, H.E. Deprez along with Mayor of LMC jointly lay stone for the Handicraft Training Center. This center is expected to be completed within 2021.

Similarly, a newly constructed viewpoint as well as cycle stand at Sancho were inaugurated in the presence of guest and dignitaries. Raj Gyawali, consultant for Cycling route of Bungamati, briefed about the cycling route as well as its potentiality to improve green movement in Nepal.

Heritage walk move ahead for another destination i.e. Bungamati Museum. On the way, traditional Newar dance was a head turner at Sata tole. Young girls beautifully performed newari dance. All guests were gracefully welcomed at Bungamati Museum by members of Maharjan Samaj. This museum was patron by Maharjan Samaj and was revitalized by Parya Sampada. H.E. Deprez and Mayor Maharjan jointly inaugurated this museum. All guest were served with local newar appetizer.

Newar artifacts being observed by dignitaries

On the way, guest visited the house of Prem Bhakta Maharjan that is traditionally constructed and technical detailing and assistance was provided by this project. In addition to this, they also witness the Ta-Falcha, a resting house supported by this project.

This heritage walk programme was convened at Prathampur Maha Vihar. During this formal programme following documents were revealed and handed over the respective authorities:

During this visit, H.E. Deprez admires the coordination and contribution of local women, youth and government in preserving the tangible and intangible heritage of Bungamati. She highlighted the strong bond between EU and Lalitpur Metropolitan City through the Parya Sampada Project. The joint stone laying ceremony of the Multipurpose building at Bungamati is evidence of the same.